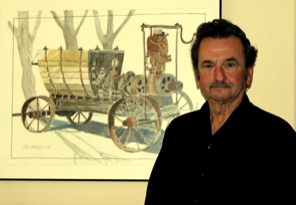 Joel was born in Atlanta, GA; and he grew up surrounded by people focused on the land and the landscape. One of his grandfathers was a farmer in south Georgia. The other was Head Florist of Dahl’s Nursery, once one of the largest in Georgia. As a 10-year-old boy, he roamed and explored Dahl’s 500-acre growing grounds that included a giant bamboo forest and a Civil War fort. As a teenager, he spent summers working with his father, a landscape contractor. Joel worked alongside his father and his father’s crews to install gardens all over Atlanta. This early exposure to nature and the land shaped his life and his art.
Joel graduated from the University of Georgia with a bachelor’s degree in landscape architecture and received a master’s from Harvard University. After a stint in the Army, he became Assistant Campus Planner at the University of California at Santa Cruz. Later, he taught landscape architecture at Louisiana State University in Baton Rouge; the University of California at Berkeley; and San Francisco State University.

For 31 years, Joel was Park Planner for the City of Pittsburg. As he neared retirement, he began pursuing his longtime love of fine art. Joel took drawing and painting workshops with such nationally known watercolorists Tony Couch, Ron Ransom, Stephen Quiller, Frank Franchese, Judy Greenberg, Charles Reid, and Tom Lynch as well local art teachers Sal Valencia and Francis Palermo. He generally paints plein air in watercolor. He has shown his paintings in many California art shows. He is a longtime member of the California Watercolor Association. A few years ago, he was invited to join 27 other CWA members who showed their work at Gallery Concord. Joel is the past president and presently the vice president of the Arts and Cultural Foundation of Antioch. He helped organize the Pittsburg Arts Collaborative and helped organize the PACO biannual juried art shows for the past 15 years. He is now a member of the Art Guild of the Delta.