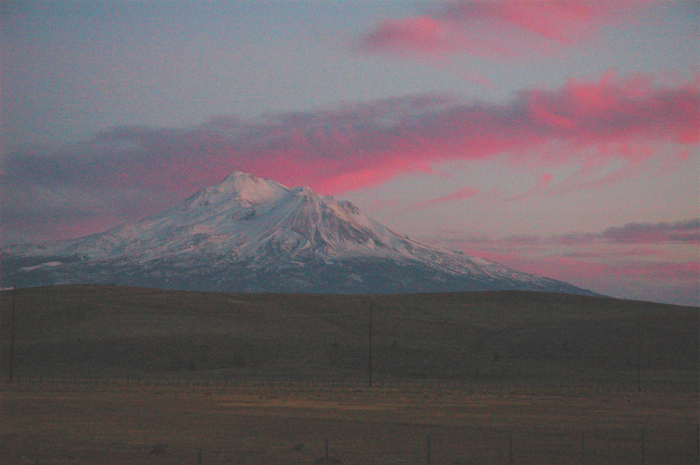 The photographs in this show are digital prints taken between 2009 and 2012. My art combines digital photography with mixed media to express the tension between nature and culture. Mount Shasta – Úytaahkoo in native Karuk language – provides dramatic landscapes that bear witness to a history of indigenous people whose presence modernity overshadows.

Shasta Nation tribal member, Norma Jean Croy, explains in California History: The Hidden Genocide –
“ The Shasta Nation… made a treaty in 1851 with the United States government [that] … was never ratified by Congress, but the Indian people were [led to] believe it was an honorable agreement. To celebrate the signing of this treaty, the Indian people were invited to a feast at Fort [J]ones. The meat was laced with strychnine and 4,000 Indian people died there.”

…From 1850-1890, disease and murder reduced the indigenous people by 94%. Local bands of citizen “volunteers” roamed the [region] killing Indian families, winning praise from their fellow citizens and payment from the state. For $3 and a little paperwork, “citizens” could indenture any Indian for 25 years. “Citizens” received from .50 cents to $5 per Indian scalp. The state of California paid out over a million dollars for scalps. Source: http://www.kstrom.net/isk/stories/normtrea.html July 27, 2008.

This art expresses a reverence for nature that persists beyond the asphalt, barbed wire, power lines, cars, trucks and complexity of our modern world. By taking pause in the shadows of Úytaahkoo, one may feel the omnipresence of nature, reconcile its cultural legacy, and realize that this footprint is ignored at our own peril.

I live in Antioch and teach Special Education for Antioch Unified School District. I am self-taught in photography and as a painter. In recent years my photography has been incorporated with mixed media to express tensions between nature and culture that I feel are inherent to modernity.